If you enjoy knitting and felting, I can suggest a fantastic pattern – the bag Musset by Olivia Ferrand: 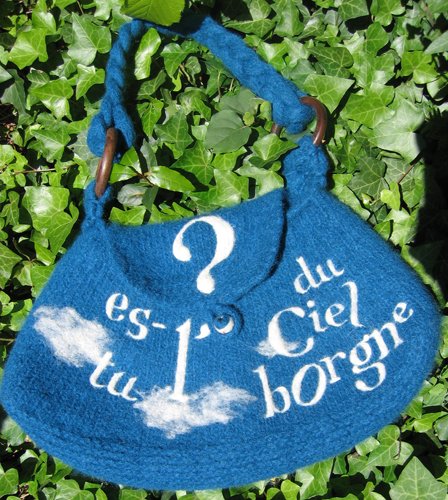 The bag is knitted, felted in the washing machine and decorated with needle felting.

And if you don’t enjoy knitting at all and only want to crochet, don’t worry – there are plenty of crochet patterns to come!

I  heard about « mosaic crochet » quite a long time ago, but I never got to try it at the time. Since I still wanted to delve into this technique, I decided to devote a newsletter to it – a very good excuse to try something new and indulge in my love for swatching.

When I first realized how mosaic crochet was worked, however, I thought I would have to find a new subject for the newsletter. If I were to describe the technique very briefly, I’d say it’s almost like spike stitches, a technique I covered in the newsletter for September last year, except that the longer stitches are double crochets instead of single crochets.

However, since I couldn’t resist my desire to continue swatching and compare the two techniques, I soon had plenty of thoughts to share with you! (If you didn’t read the September newsletter, please check it out – it will make it far easier to follow the discussion below).

Let’s have a look at this swatch: 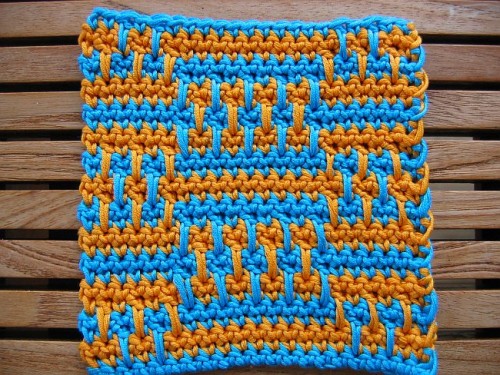 If you study it carefully, you will see that the base of the colourwork is a simple two-row stripe pattern in sc, alternating two colours (here turquoise and orange). This simple stripe sequence is characteristic of mosaic crochet.

Mosaic crochet is directly inspired by mosaic knitting, where you also find these two-row stripes.

The longer stitches are not sc but dc. They are always worked into a stitch in the 3rd row below, which is the last row in the same colour. The look is quite similar to what you would obtain when working spike stitches over the same color sequence, but I have noticed a few differences. 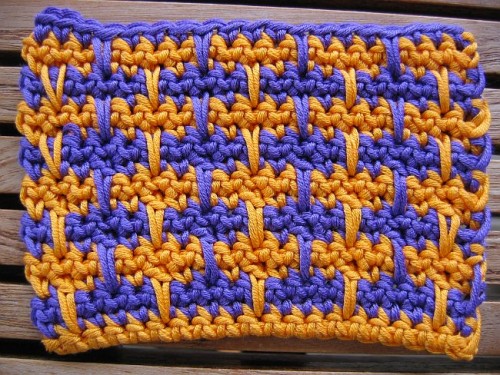 It’s extremely hard to see any difference whatsoever on the right side. However, if we turn it over, things look a bit different. 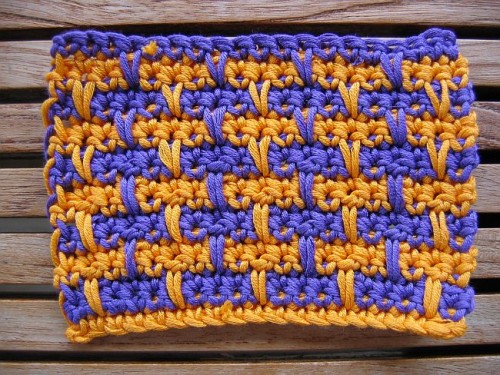 Here, it is quite clear that the long scs at the top open up quite a bit more on the wrong side of the work. The long dcs at the bottom look more as they do on the right side.

I wanted to try diagonal stitches in this technique, and tested this stitch pattern: 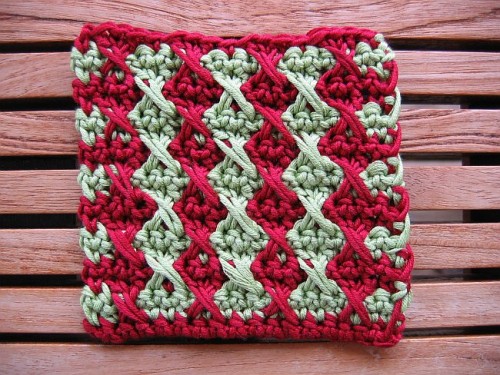 It’s very space- and time consuming to write out a pattern in mosaic crochet, and I think a chart makes much more sense. These are the first four rows of the stitch pattern, which is worked over a multiple of 4 sts + 1:

Note that the first row is worked on the wrong side of the work. Change colour in the last stitch of the row.Let’s add the next rows to the chart:

It might look complicated at first glance, but once you work it up, it’s quite easy to understand.

When working these slanted stitches, I felt that they were easier to work since the long stitch had more « give » in itself. I think this is due to the extra yarnover in the dc, which builds in more yarn and thus more elasticity in the stitch.

I also had the impression that the fabric wasn’t as dense as I had expected. So I worked up a swatch in the exact same stitch pattern, replacing the dc with sc, just to see if it changed anything. And it did. 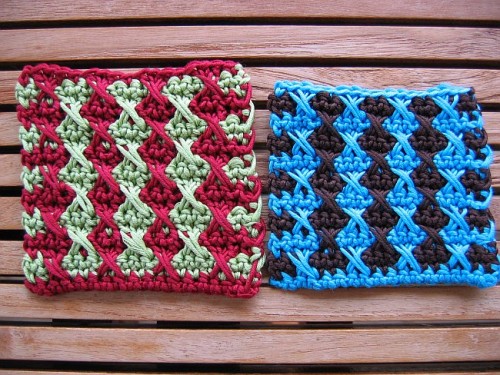 When comparing the functionality of the two techniques, I see sc spike stitches much better suited to any design where sturdiness is wanted: a bag, any kind of vessel, a sculpture…

Mosaic crochet is flexible enough to work in a design that requires more drape. I’d tend to think it would be best worked as details: a border, a cuff, a collar… but it all depends on the pattern, the yarn and the hook size.

Mosaic crochet is definitely a technique with which  you can experiment a lot and make up your own stitch patterns, built on the base of the two-row stripes and the long dcs. Have fun! 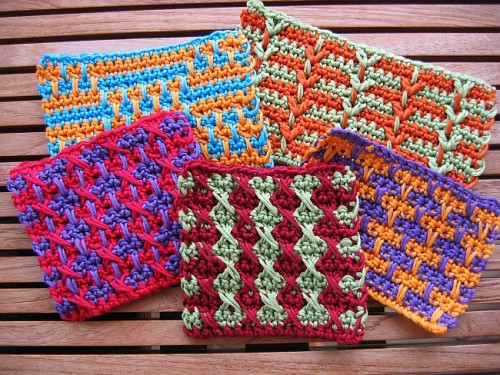 And remember, you have a new desktop wallpaper for February right here, if you like!