In the last newsletter, I explained how I started working a project with a beautiful, unique handspun skein of yarn.

Up to the point where the first part of the story ended, everything had gone more or less according to plan. However, designing is never a predictable process. Here is the second part of my adventure.

My stitch pattern was a multiple of 4 + 1, so I chained (7 x 4) + 1 = 29. My swatch had taught me that the starting chain was a bit tight (but not tight enough to warrant 2 extra chains per repeat), so I used a 6 mm hook for the starting chain and changed to a 5 mm for the first row.

I crocheted about 10 cm, and started to have second thoughts. My work looked wide. Too wide. It would really have to scrunch up a lot around my neck – and how would that look with the buttons? Buttons don’t really scrunch the way crocheted fabric does.

I held the crocheted piece up to my neck. I considered options like folding down a part, not buttoning all the way… and decided it was too wide anyhow. I needed to take off 2 shells in width at least.

So I ripped out the piece (with care, so as not to damage the softly spun yarn), and started again by chaining

It says a lot about the quality of Fabienne’s spinning and the fiber itself that the yarn held up for this much ripping. If I hadn’t been able to rip out and reuse the yarn, I wouldn’t have had anything left to work with by now.

All was well, and I crocheted to the required length (50 cm, as calculated previously). 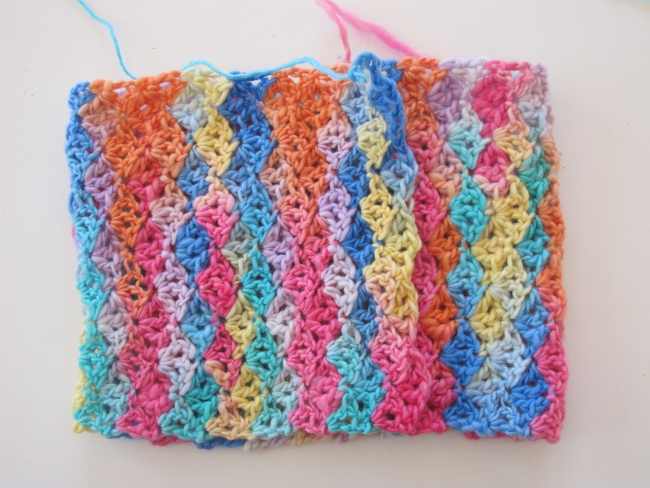 This would be a perfectly usable cowl. However, my goal was to use all my yarn (or almost all of it), and I had quite a lot left.

I toyed with the idea of adding a border to the cowl, particularly at the bottom. However, there was not enough yarn left to make a large border. I thought a small border might just look ridiculous. And there was so much going on here, with the stitch pattern and all the colours. I felt that this project needed to be rather simple, to let the yarn speak for itself.

So I started to play around with my strip of crochet on the table. Rather quickly, it fell into a shape that spoke to me. 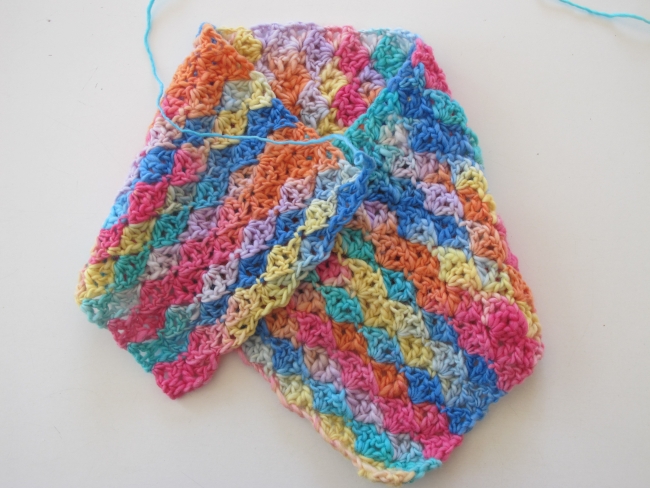 This was something I could work with. Evidently, if I wanted to wear my cowl-thing-whatever this way, I needed to work more rows, and I had more yarn. So I crocheted on.

The vision in my head looked something like this: 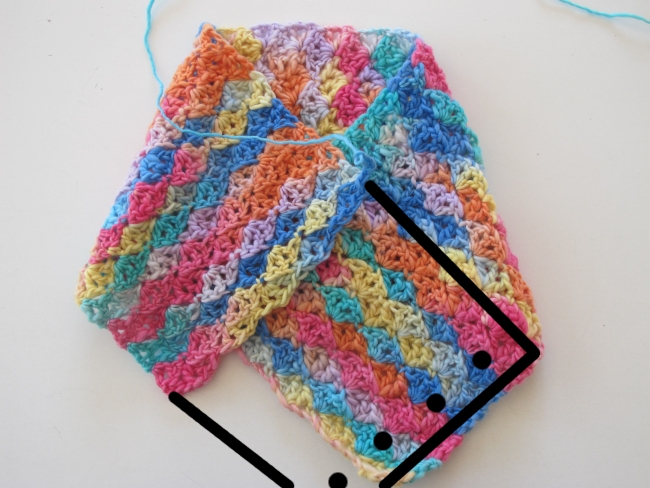 However, as my project grew, I realized that this looked fine flat on the table, but didn’t really work when worn. To make the short end align with the long edge at the bottom was easy as long as the piece lay flat. But wrapped around my neck there was no way to make things line up if I still wanted the cowl to fit reasonably.

People’s bodies are not flat or made from simple geometric shapes. I realized that there was potential for such a design, probably using short rows or varying stitch heights. However, it was not to be made in this yarn. A design with fitting issues, where I couldn’t visualize immediately how the shaping should be done, needed to be tested in a smooth, solid-coloured yarn, easy to rip and showing the shaping clearly.

So finally, after all the calculations and all the ripping, I made a very simple buttoned scarf from my beautiful yarn. 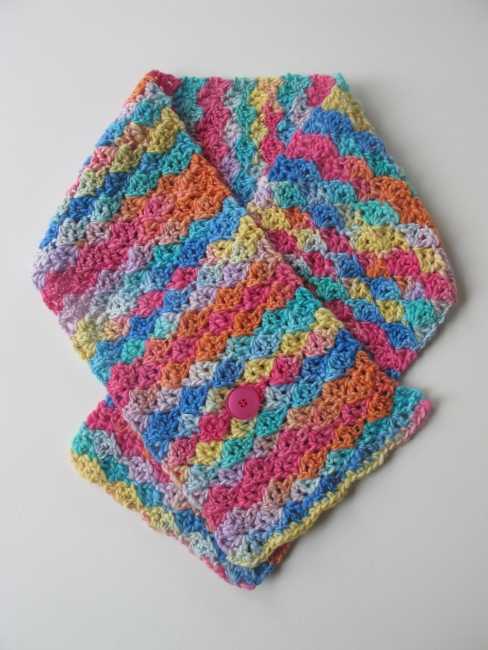 I worked until the yarn was used up, I tried it on and decided where the button should go. For the last time, I carefully ripped back a few rows to modify a shell to work as a buttonhole. Then I finished up the scarf, wove in the ends and sewed on the button.

I was a bit disappointed for, say, three minutes. Then I realized that I had achieved my goal, which was to show off the beauty of the yarn (and not to make an intricate design). Also, I now had a new design idea in stock, for a cowl that would button as in my « idea picture » above and fit well around the neck and the top of the shoulders.

The final result can’t really be called a « design », but it’s a functional, fun and pretty scarf to wear. And like every single time I work on a project, I ended up with new ideas.

And you? What do you want to make with that unique skein of yarn hiding in your stash?