There are (a few) crochet designers who invent complicated new stitch patterns from scratch. I admire them a lot, but I’m not one of them. I generally use an existing stitch pattern as my starting point. Sometimes I’m inspired by a stitch pattern, and use it as a part of my design. Other times I have a more general idea of what I want to make, and I search for a stitch pattern that would work in the design. I may find something that fits the bill perfectly, but very often, I modify the stitch pattern to make it suit the design (and my personal taste!).

In this month’s newsletter, I want to share an example of the process with you.

I was randomly leafing through stitch dictionaries (I won’t tell you how often I do this!) when I stopped at a specific pattern in a Japanese book. I had already noticed it, but this time I decided to work it up in the lace-weight yarn I wanted to use, to see how it would turn out. 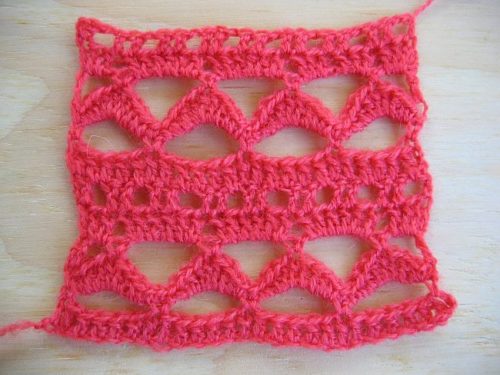 Not bad. I still liked it, and what attracted me the most were the crescent-shaped… waves. I wanted waves. I decided that these « waves » were going to be the focal point. Therefore, I didn’t need all the dc rows in between. I only needed one, and I wanted that one as simple as possible – like the row right under the waves in my first swatch. I also wanted the waves to stand out a little more, to be a little more prominent. In the original stitch pattern, the highest stitch in each wave was a dc – but I already intended to put a dc row between the waves, with the same height. So I decided to use trebles in my waves.

I also thought that each wave could have a couple more stitches in it. There was enough room in the chain-space to put in two more stitches without modifying anything else.To remember all my thoughts and ideas, I plotted out a diagram (I use specific software for this, but pencil and paper work fine, too). I then proceeded to work a second swatch. 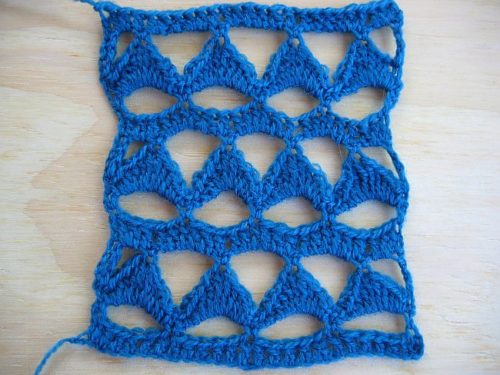 Almost there! But, well… I’m sometimes a bit detail-oriented. And the detail that bugged me here was that the waves looked more like arrows than like waves. They were too pointy. To create a more rounded shape, I increased the number of trebles in each wave from three to five. 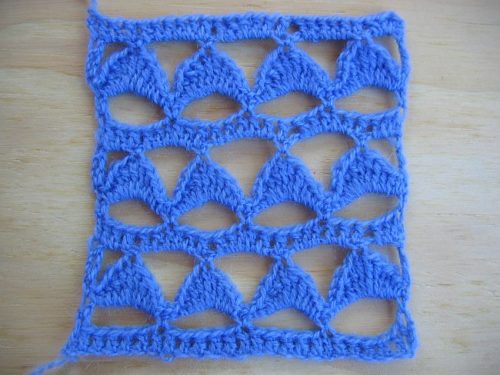 Hard to see the difference? Perhaps, but I’m happier with this. It reflects my vision more precisely. I can see the waves ripple over the water…

So, take a hard, long look at your favourite stitch patterns. Perhaps you can change something in them, to create something new and uniquely yours!