I’m very happy to present a new shawl design by the very popular and talented EclatDuSoleil: Corolle, a crescent-shaped shawl 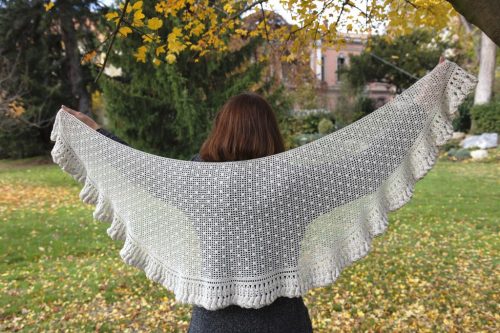 The light and airy center contrasts beautifully with the magnificent flower border, which gives drape and character to this shawl.

This shawl can be crocheted in any of the laceweight yarns in the shop.

Another technique for narrow stripes

In the newsletter for October 2013 I discussed the use of one-row stripes. The technique I showed to carry up the yarn in colour A past rows crocheted in colour B is the one used by EclatDuSoleil in several of her patterns, such as Colour Beams or Sea and Sun. It involves chaining a specific number of stitches to compensate for the height of each row, and adds a chain at the selvedge of the work.

I was contacted by the fabulous Mmatilda of the blog Mmatildas virkstad, a fellow Swedish crochet fanatic, and in her e-mail she showed me her way of handling this. The chain method is fine, and has some definite advantages, but I found Mmatilda’s method so interesting that I wanted to share it with you.

I tried it out in a solid dc swatch, worked according to my preferred method, starting each row with 2 chains that don’t count as a stitch (see my newsletter from July 2009). 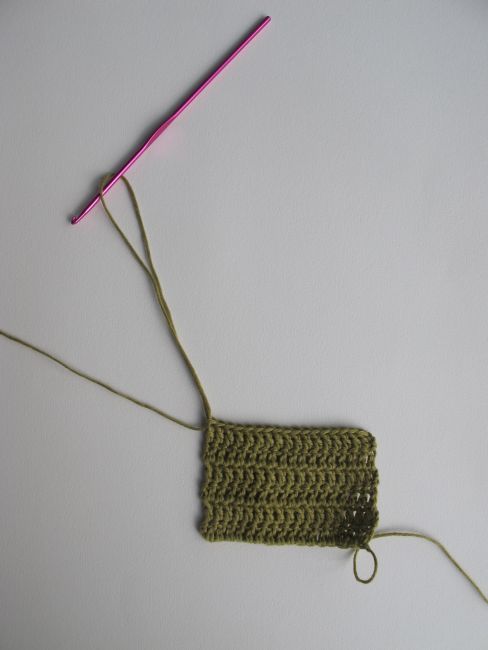 Here, I want to start my one-row stripes without turning the work. Instead of leaving a « live » loop with a marker in it, I pull out the loop on the hook. 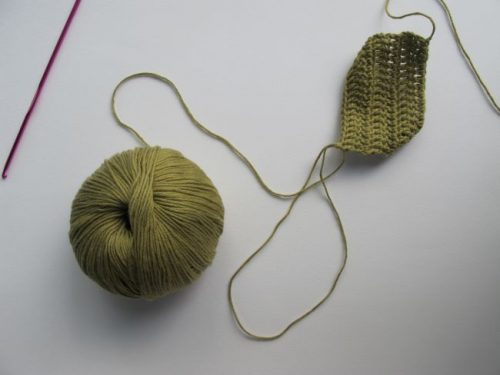 I pass the entire ball of yarn through this elongated loop. 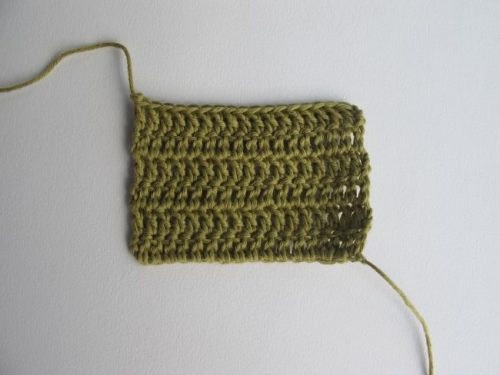 I tighten up the loop (without pulling too fiercely). The yarn is well secured, and hangs at the edge of the work. 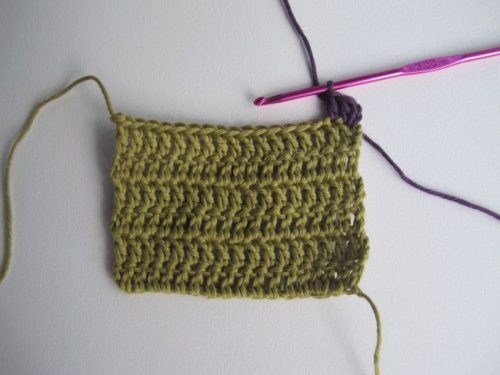 Since I have decided to work the first stripe from the same side as the last row in colour A, I don’t turn the work, but simply go back to work into the beginning of the row. I pull up a loop in colour B, and start my row just like the others, with 2 ch that don’t count as a stitch followed by a dc in the first dc.

The neatest way to do this when there is a turning chain at the beginning of the row is to insert your hook into the top of this turning chain to pull up the loop, and then work your first dc into the first « real » dc in the row. This is something I realized after the photo above was taken. 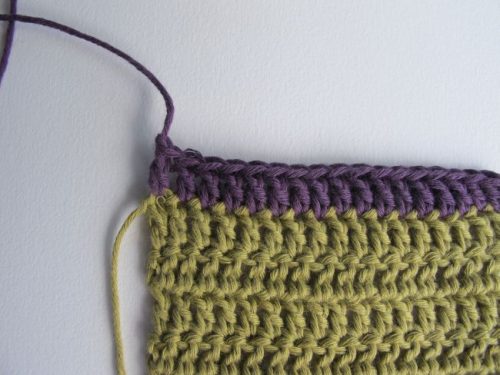 At the end of the row, I elongate the loop on the hook again, pass the ball in colour B through the loop, and tighten it. 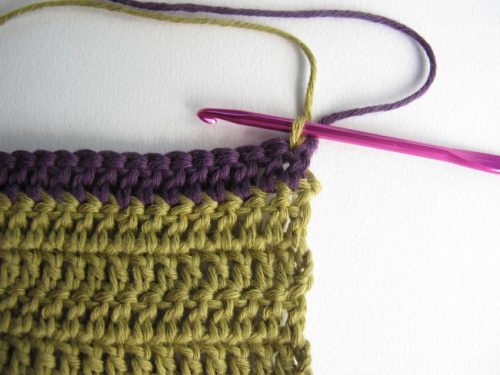 I turn my work, insert my hook into the first stitch in the previous row and pull up a loop of colour A. On the front of the work, the path of the yarn in colour A is next to invisible. 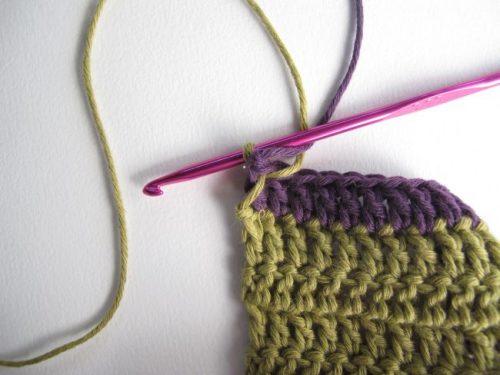 On the back, a single strand of colour A can be seen traveling up along the edge.

I really liked that this way of working made it possible to carry up the unused yarn along the edge in a very discreet way. This works very well when the contrasting yarn has to be carried for only one row. However, if the narrow stripes are spaced out against a background where the colour A is worked in more rows than one, we need to find a way to attach colour B to the selvedge so that the strand of yarn running up along the edge doesn’t get too long. Long strands are harder to handle and can easily snag on things.

I can imagine several ways of handling this. I opted for a method that I felt adapted well to the logic of the technique. 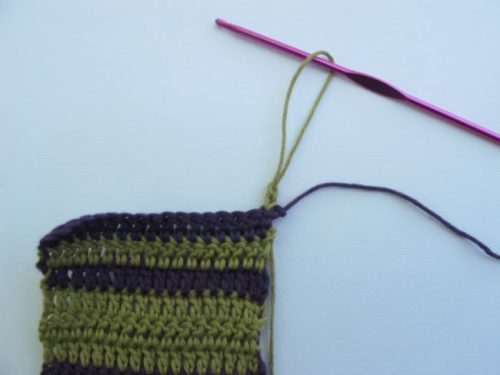 I have worked a couple of stripes in colour B (eggplant), and now I want to work several rows in colour A (green). I start with my 2-ch turning chain, and elongate the loop so that I can pull the ball of colour B through it. 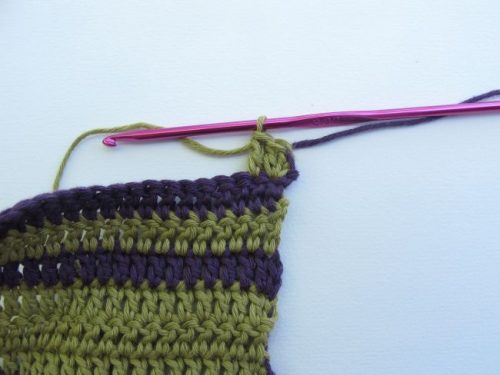 The colour B yarn is now attached to the top of the current row. 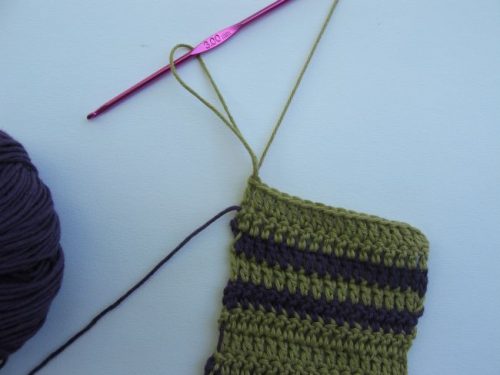 When I come back to the selvedge where the yarn in colour B is attached, and after completing the last stitch in the row, I once again pull up the loop on the hook and pull the ball of colour B through it. The idea is to attach the carried yarn at the top of each row in the other colour.

This is how my swatch looked after carrying up colour B for five rows, then reusing it. I think the result is neat and nice. The visible strands can be hidden in a seam or covered with an edging. With a fuzzier yarn than this very slick cotton, they will be even less apparent.

When I first discussed this technique with Mmatilda, I was in the process of working up a sample of EclatDuSoleil’s Colour Beams shawl. I switched to the one-strand method described above towards the end of the shawl. 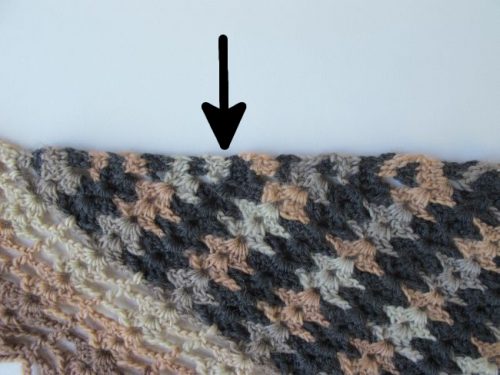 The change occurred approximately at the arrow. Chain method to the right, the one-strand method described in this newsletter to the left.

Now you have at least two methods for working narrow stripes – the choice is yours!

If you have questions, comments or suggestions, don’t hesitate to share in the comments below.

The swatch in this newsletter was crocheted in
Annette Petavy Design Organic Cotton,
col eggplant and sunlit moss,
with a 3 mm Hiya Hiya hook.